- September 06, 2016
A bit of a random thought post ... one I meant to make at the time, but got distracted.  I've talked a lot about the USDA Food Pyramid, and less so about My Plate, both of which are intended to "translate" dietary recommendations to a visual form.  In this regard, My Plate is a great improvement, but still lacking.   I don't wish to rehash the whole guidelines again in this post, but I believe if certain foods were "properly" classified -- e.g.  potatoes and corn grouped with the grains/starches -- the recommendations are hardly radical.  If Americans actually followed them as intended, we wouldn't be in this pickle, but we don't, and we are.

Here is the original food pyramid 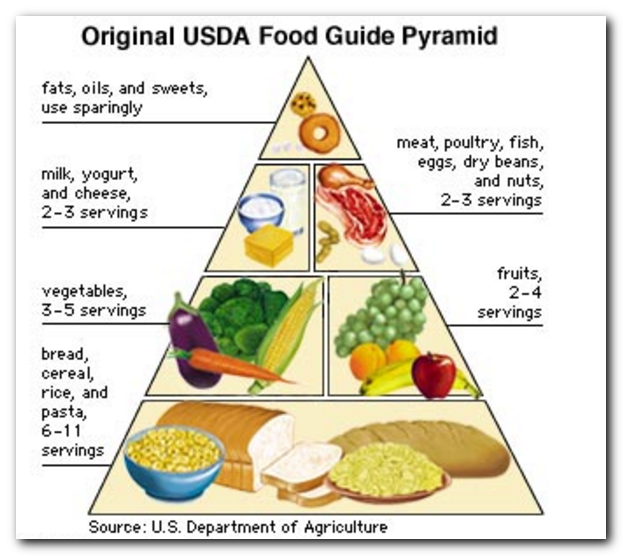 Whether intentional or not, everything but the base there can be easily sub-dividable into three meals and a snack or two.   What is a serving size?  Therein lies a problem with the whole pyramid scheme, but it is especially problematic with the grains there.  A serving of bread is one regular slice (1 oz = 28 g).  This equates to 1/2 cup cooked rice, pasta or hot cereal or 1c. cold cereal like corn flakes.    As you can see, a sandwich -- very common lunch item, especially to take to school -- actually contains two servings of grains.  Veterans of women's mag diets such as myself will recall the articles about what constitutes a serving, and as certain items got larger, or were more dense to begin with, we were cautioned!  A bagel was not so simple!  A mini one is one serving, while a larger one, such as you might get in a deli, could be as many as four!!   This is why Tara Lipinski eats "scooped" bagels, because the goodness is in the outer part anyway, way better than the half bagel.

I remember back in the day when I used to eat Bran Chex (I still like them dammit), carefully measuring out a cup, or was it 3/4 of a cup, and having that with some fruit.  It was never enough.  "Nobody eats one serving Evelyn!"   Well ... true!  Even at the low end, 6/3=2, and most people wouldn't be having cereal and a slice of toast etc.   Even before the endless bowls of pasta at Olive Garden, if you got a side of spaghetti with sauce in a restaurant it was closer to a cup of pasta than half, and your parents wouldn't have batted an eye if you put that much on your plate.

We are not alone in this.  Here's the Japanese Spinning Top (what inspired this post) 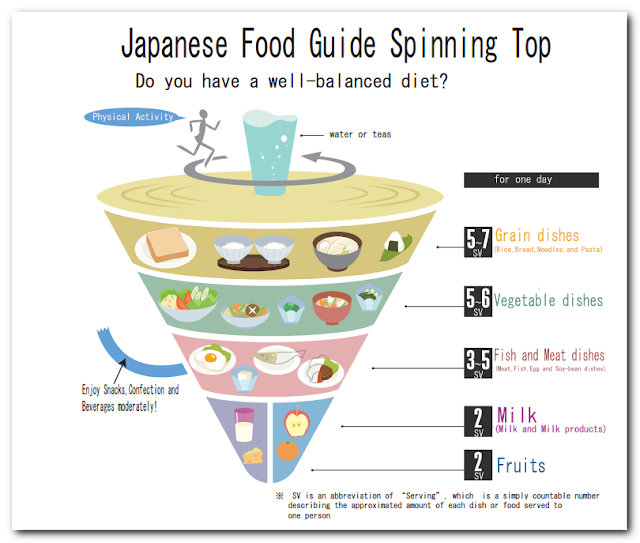 It is very important to note the asterisk in the lower right:

SV is an abbreviation of "Serving", which is a simply countable number describing the approximated amount of each dish or food served to one person.

Note the much smaller range of servings.  Whereas in the US it's 6-11, in Japan it's 5-7.  Do the Japanese eat all day long?  Because if they don't, their definition of a serving is unworkable.  The amount you give one person?  I know this goes counter to the purpose of such visuals, but perhaps "units" is more appropriate realizing that a smaller person requires fewer units than a larger one.

A Personal Anecdote:  In addition to hints I've dropped here, I've mentioned on Twitter, and in outright discussions on Facebook that my personal diet has changed radically over the past year or so.  I have not done VLC for several years now, I don't even recall any definitive shifts, it was a gradual transition.  Still, old habits of my VLC "default diet", followed for quite a few years, die hard.  When you prioritize protein as I did, and that means at least a moderate amount of fattier meats and cheese, and you eat large salads with olive oil in the dressing, the "real carbs" get short shrift.

I am not sure if it was my husband's health issues, greater exposure to moderate vegan voices, or just an aha moment looking back on the huge body of work that is this blog and beyond delving into the research.  Probably some perfect storm of it all.  But I feel one cannot look at the entirety of what I/we know about human physiology and metabolism, nutritional science, human diets spanning the globe and the ages, and even frankly just looking at the die-hard purists promoting various diets, and not come to the conclusion that a very plant-centered, generally lower fat (and low in animal fats) diet is the best "bet" for health.   I may or may not share more details on how I eat these days here on the blog, but suffice it to say that my big meal of the day typically includes at least four "servings" of lentils, beans, potatoes, rice, corn, peas, "pseudograins" and/or pasta (yes sometimes even the regular kind!).  Did I leave any starches out?  This is about 4-500 calories and a lot of food, especially once the veggies are added.  I may have a lean animal protein, I may not, if I do I tend more towards a bit less of just potatoes or rice.  That's as much detail as I'll go into for now, and I share it not to give out dietary advice, or weight loss advice (though for Fat Head's edification, I've now lost even more weight eating all the carbs - grin), but to make the following points ...

It is very easy, especially if one has ever eaten a low carb diet for any length of time, to get an even more distorted view of what a serving of starch is.  This is compounded by a tendency to overestimate the carbohydrate content of many foods.  If you become entangled in the IHC, with its seeming infinite tentacles, it's practically impossible to not become carbophobic.   In this regard, one of the few redeeming qualities of these various "hacks" is that the potato diet can fix this phobia for most people who give it an honest try.  Yes, even diabetics.  Yes, even sedentary people.  The amount of disinformation about metabolism and carbohydrates out there is staggering.  I hope to get back into some semblance of regular blogging, but it's just not happening in the mojo department!  Wish me luck!!

Anna said…
Dear Evelyn, I have been reading your blog with great interest. And I love potatoes. But I am diabetic and they send my blood sugar into the upper 200s every time I eat them. I ate a low fat, plant-based, potato heavy diet most of my life and it kind of led to the diabetes. So is there a 'trick' to this? How can I get back to eating my beloved potatoes while keeping my blood sugar within the normal range? Please let me know as I really hate meat/fat etc. Thanks :)
September 21, 2016 at 4:15 AM