Maybe the Solution Lies in Making the Food Industry Our Friends

In our current times of rising obesity and chronic disease rates in the developed world (and spreading globally), I see a handful of "usual suspects" upon which the phenomenon is blamed:


By far and away, in no particular order, the two at the top of the list shoulder most of the blame.  You know the story by now.  Ancel Keys .... McGovern Committee ... Low fat dietary guidelines ... we got fat because CARBS and INSULIN!!!

Who hasn't seen some version of this image implicating the Dietary Guidelines of 1980?


Yeah, yeah, usually after some disclaimer about how correlation doesn't equal causation ... in most cases except this one!  Images such as this are accompanied by fallacious claims that Americans have actually dutifully followed the USDA Dietary Guidelines!  In seeming parallel to our perpetual election cycles, the anti-Dietary Guidelines forces have been continually beating the "low fat made us fat" drum since the run-up to the 2010 guidelines.  This is all in spite of the fact that NHANES, 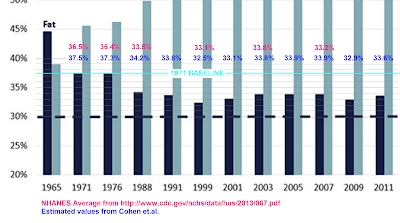 clearly show otherwise. (Don't look now at the correlation to fats & oils, LOL! THAT doesn't count because it doesn't fit the narrative.)

The Government & Big Food are in Kahootz!

In a recent discussion on Facebook, someone posted the following image as some sort of smoking gun showing collusion between our government and food manufacturers.

In an ideal world, I suppose the government should have marshalled its forces to educate the population on the already plentiful array of naturally low fat foods available and the most time-efficient ways of incorporating them into daily life.  The government could have done a WAY better job of policing advertising and labeling claims, particularly labels referring to "low fat" and "whole grain".  But that said, a less jaundiced look at the above reveals a reality already in full force circa 1990.  Americans had become a convenience culture replete with restaurants and groceries offering fully prepared to heat-and-eat meals 24/7/365.  In a culture where most children were fed increasingly in school, and didn't go home to single wage-earner two parent households at the end of the day, where most singles had no idea how to cook (pretty guilty here despite cooking with Mom a lot growing up), where did (and still do) most Americans go for foods?  These convenient outlets.

In the late 80s and early 90s, as a single woman who worked full time, lived alone or with a roommate with whom food was not shared, and commuted a fair distance to go to grad school several nights a week, I remain grateful for Lean Cuisines.  I enjoyed a few McLean Deluxe's from the drive thru on my way to class from work ... before those quickly disappeared from McDonald's menu.   I was grateful for reduced fat cheese slices and lower calorie bread items to pair with lean cold cuts or tuna prepared with light mayo to bring lunches to work.   And don't look now, but in addition to low fat items, as just mentioned, the low carbers have the food industry (for better or worse) to thank for a wide array of sugar-free sweetening options that actually taste good!

The biggest problem with encouraging the proliferation of low fat processed foods is that the food industry focused on substitutes for high fat foods, rather than creating low fat options by expanding food choices.  It is because of this that so many believe the opposite of normal-to-high fat foods is cardboard.  I don't buy the idea that the "industry" cannot profit from "real food".  Anyone who believes that has never been to a Mexican restaurant in the Northeast.

In the end,  the "low fat lie" brigade is seriously living in the past.  I'll never forget reading the following:

The elimination of the upper limit on total fat would make it easier for industry, restaurants, and the public to increase healthful fats and proteins while reducing refined grains and added sugar.

At NO time in our country's history have food manufacturers been constrained in the fat content of the food supply.  They just added *some* lower fat options to convenience menus.  I discussed that in this post, that highlighted the Olive Garden menu of the day.  Even Subway, the only fast food chain that actively advertises an array of low fat options, has plenty of higher fat fare.  Forget 30%, peruse the menus of any of the family style restaurant chains, and it becomes obvious that eating a low fat meal is probably a futile endeavor.

Can we stipulate to the fact that Snackwells were an unmitigated failure and move on please??   What we need in this regard is so-called obesity experts and researchers to wake up to the real world and acknowledge the problem instead of trying to sell diet books and cook books.  (I tweeted a chicken recipe from Ludwig's new cookbook that contained 5-6 added tablespoons of oil in a chicken recipe to serve 4 ... there's simply no need for that much oil in a sauce over chicken thighs!!).  The problem is culturally ingrained eating habits and *norms*.

IF there is a problem with the food supply it *IS* that truly low fat options in the convenience niche are sorely lacking!

Since my switch in dietary strategy, I've pretty much come to the conclusion that there's no use trying to order a low fat meal while eating out.  The choices are so few and even stand by sides cannot be trusted without checking first (even pasta with plain marinara sauce and steamed veggies will barely skate under 30% fat at some places, let alone be truly low fat as they ought to be!) .  It gets a little better if one is selective in their packaged convenience food purchases, but it requires a lot more planning than it should.    The 1990s era edict failed (miserably) to produce the convenience Americans darn near demand.

If  you prepare and eat most of your foods at home, a very low fat diet is rather easy and extremely economical.  If you pick and choose from convenience items available, it can be even easier without busting one's wallet.  If food manufacturers could just stop adding unnecessary amounts of fat to the convenience food supply, that would be a most welcome start.    I know that if I can make amazing, tasty, very low fat foods, *someone* out there has the where with all to translate this to a larger scale convenience market.

Of course this feeds into the perpetuation of macro fixation vs. focusing on foods, but I'm a pragmatist.  I don't see the rather simpler macro-centered paradigms going away any time soon.  In that spirit, maybe the solution lies in engaging the food industry to make meaningful change to the healthy options in the convenience food supply.   FORGET THE SNACK FOODS.  Focus on combining real foods into convenience meals!!  Sure, we can do this for ourselves, but wouldn't it be nice if the food industry did more of it for us sometimes?