- March 27, 2012
In honor of Jimmy's podcast with the new leader of the Insurgency, Peter "War on Insulin" Attia, MD, I've gotta introduce the latest in my series of Lego superhero analogies.  Attia is younger and considerably more photogenic than Taubes and puts a fresh face on the movement.  When Taubes introduced Attia on his blog, I just couldn't help but think "Boy Wonder" ... and it all started to fall into place.
The "Dynamic Duo" of Taubes and Attia will from now on be known as Fatman and Glucagon here at the Asylum!  These two shall patrol Glutton City in their Fatmobile protecting its citizens from the dastardly deeds of team CICO. 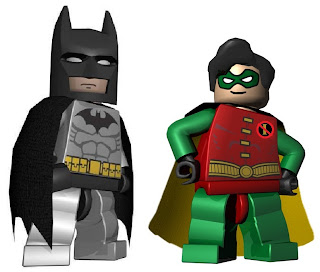 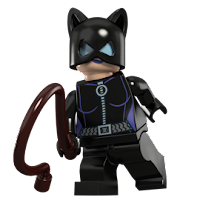 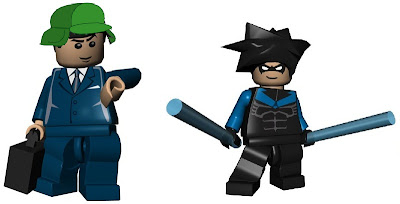 ProudDaddy said…
Here's what I don't understand (along with a whole bunch of other things): Dr Attia says insulin is the great enemy, but he often starts his day with a whopping amount of whey protein. Have I misread all those studies about the insulin spike from whey being equal or even greater than pure sugar?
March 27, 2012 at 5:28 PM

Lesley Scott said…
@P-Daddy You totally read my mind with your question! I remember reading a long piece on Ned Kock's site a while back about how protein generates huge post-prandial insulin spikes.

Karen said…
according to my glucometer it (whey protein powder) doesnt hurt me. But everyone is different
March 27, 2012 at 8:43 PM

Tonus said…
I guess the most appropriate response is along the lines of "Bah! You're no different than anybody else!"
March 28, 2012 at 6:38 AM

Nigel Kinbrum said…
No. You're absolutely correct. See THIS

CarbSane said…
Meanwhile he boasts eating 4500-5000 cals/day now. I can't for the life of me understand why one would go into "nutritional ketosis" so they supposedly had to eat 1000+ more cals/day to sustain their 3 hr a day workout habit. But that's just me ;)

I'm more disturbed that someone with a medical degree would read GCBC multiple times with 4 different color highlighters and 4 different color page tab stickies and come away with over 20 pages of questions to ask the great Gary Taubes. That is troubling.
March 28, 2012 at 7:26 AM

ProudDaddy said…
Yep, Nigel, but the fact remains that you heve a high level of "deadly" insulin in your veins! However, I know only that glucagon stimulates hepatic glucose production. If it also liberates adipocyte fats, then I guess Attia need not worry that his actions confuse his theory of obesity. However, what about things like diabetes? I don't subsribe to the theory that an overworked pancreas leads to T2D, but I'd guess most of the carbs-can-kill proponents do.
Speaking of which, is it hyperglycemia or hypo insulinemia that leads so many of us down the diabesity path? (OK, I know, it could be both.)
March 28, 2012 at 7:30 AM

Nigel Kinbrum said…
He needs to be hand-cuffed to a bed in a Metabolic Ward ;-D Maybe he has very high NEAT due to the adrenaline surging through his veins all the time.

Lesley Scott said…
"......while he fights off the Calorie Wizards with his pool noodles" ROTFLMAO :)

hmmm, this motley crew (excepting the fab feline, of course) needs some worthy superhero theme muzak, no?
March 28, 2012 at 4:58 PM

ProudDaddy said…
You probably caught the typo -- meant to type hypERinsulinemia. Sorry -- darn tablets!
So, does glucagon have any effect on adipocyte lipid storage one way or the other?
March 28, 2012 at 5:51 PM

Sanjeev said…
Anyone else seen these youtubes with the title template "sh*t that NNNN say", NNNN being vegetarians, yoginis, etc ... There ought to be a Taubes version.

After making the same comment ten times, not even significantly changing the wording and convincing NO ONE, innit about time to bring in something new guvnor? Too bad "broken record" doesn't resound like it used to.
March 28, 2012 at 5:52 PM

Sanjeev said…
I especially love experiencing insulin's effect on my liver (it tickles) and gonads.

I experience the effect on my fat as a humorous poking sensation ... I could be mis-experiencing a weight gain as a poking though.
March 28, 2012 at 6:10 PM

LeonRover said…
It is exogenously injected insulin that in many cases leads to high basal blood insulin and many of those put on fat.

ProudDaddy said…
Thanks Sanjeev! I think I once posted somewhere that glucagon gets no respect -- I might have been right!
March 28, 2012 at 6:47 PM

Sanjeev said…
I requested clarification if they meant diabetics who choose to inject but none was forthcoming.
March 28, 2012 at 7:56 PM

Nigel Kinbrum said…
According to Glucagon, glucagon is catabolic and it increases GNG & lipolysis.

Increasing lipolysis increases conversion of TAG -> Glycerol + FFAs.
Glycerol is converted into glucose by the liver & kidneys.
Un-burned FFAs enter adipocytes with glucose for conversion into TAG.
March 28, 2012 at 9:11 PM

ProudDaddy said…
Thanks, Nigel. I had read that, but it was unclear to me whether the conversion of TAG was serum TAG, adipocyte TAG, or both. Then, of course, the question would remain as to whether glucagon is releasing as much fat as insulin is stuffing into the fat cells. And one is left to wonder why Mom Nature would design a system with two hormones that get produced only to directly cancel each other out. Surely, there must be some things each does that are different than just cancellation. For example, insulin may assist in glucose uptake by muscle cells while glucagon has no effect, etc.
March 28, 2012 at 10:41 PM

ProudDaddy said…
I was really confused by the Wikipedia assertion that glucagon secretion is INHIBITED by insulin. That would seem to mean that the whey effect can't occur -- yet we know it does.
In the end, this is all academically interesting, but the big question remains whether hyperinsulinemia is a source of the problems of diabesity, or whether hyperglycemia is solely to blame. If the former, then Dr Attia needs to rethink his morning shake irrespective of his theory of obesity.
March 29, 2012 at 8:28 AM

Personally I think the whey is the least of Boy wonder's problems. Good thing he eats something that isn't fat.
March 29, 2012 at 12:00 PM

ProudDaddy said…
So, wrapping this up, if glucagon has no role in lipolysis, and whey protein spikes insulin, then either Dr Attia doesn't believe in the insulin theory of obesity or he isn't worried about getting fat and doesn't care if his recommendations fatten his followers.
March 29, 2012 at 12:56 PM

Nigel Kinbrum said…
I believe that Dr Attia does care about getting fat, which is why he doesn't eat too much during the day.

Sanjeev said…
Thanks so much Rodeo

Maybe I should search pubmed more than google, which sometimes gives too many hits to sort through all of them
March 30, 2012 at 3:51 PM

Sanjeev said…
> glucagon gets no respect

ProudDaddy said…
Glucagon may not deserve respect in the fat loss domain, but it seems it might have a role in impaired fasting glucose -- a condition I have a personal interest in. So, have we decided Dr Attia needs to reassess his whey intake or not?
March 30, 2012 at 6:37 PM

Based on what is IMHO "good science" Attia's kind of right, but only going half-way (he should have a lot of carbs around workouts)
March 30, 2012 at 6:52 PM

Anonymous said…
Hi there, I enjoy reading through your article post.
I wanted to write a little comment to support you.