- June 19, 2012
I'm sure most of you are familiar with the picture of the unfortunate woman below from Gary Taubes repeated use of this picture in lectures.    The top is a screenshot from Google Books of Endocrinology:  An Integrative Approach, 2001, Nussey & Whitehead, page 31.  At the lower right, I've copied the discussion of Box 2.8 from the previous page. 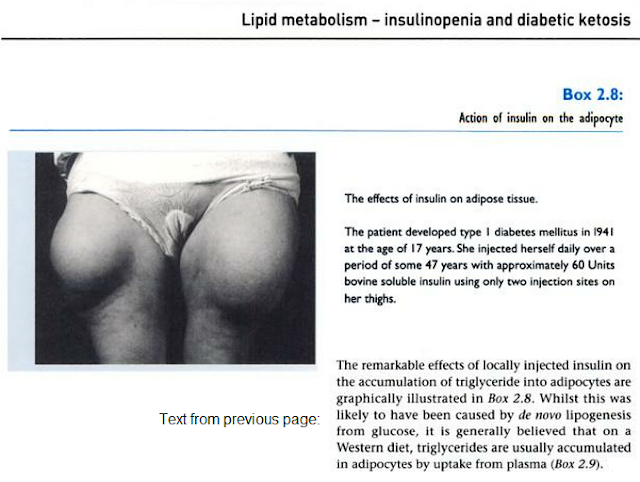 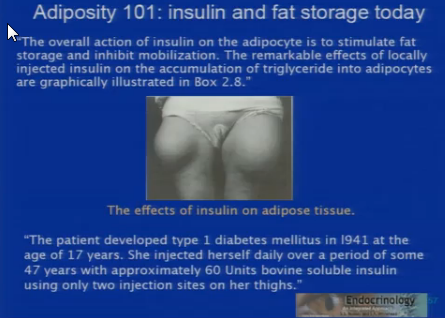 In other words, local injection of insulin likely stimulated de novo lipogenesis in the adipocytes in the area, thereby creating fat from carbohydrate and accumulating fat in these cells.   The text authors are quick to point out that this is not analogous to the normal processes by which fat tissue grows in the intact human eating a (fattening) Western diet.   This woman's fat did not become "lipophilic" sucking fatty acids out of circulation.  The localized injections stimulated a metabolic pathway not quantitatively significant by endogenous stimulation.
Yes, this is a relatively small quibble.  But the sheer number of these quibbles alone, leaving aside the major mangling of the science, is staggering.
DNL/de novo lipogenesis Gary Taubes Fact Check Insulin

cwaiand said…
just curious as to why you posted this?have you not been over this a million times already?seams something more productive of your time may be more helpful to folks.
June 19, 2012 at 12:00 PM

Sanjeev said…
WOW, thanks for this

[0] amazing that it's still intact in some places. It's much more like the doomsday cults that get stronger when the date the earth's supposed to be destroyed comes and goes with nary a whimper
June 19, 2012 at 12:26 PM

than any kind of genuine seeking by the curious or a good faith search for "Truth" (big ones like what causes obesity) or even "truth" like what I should have for breakfast?
June 19, 2012 at 12:33 PM

CarbSane said…
Came across it while working on my video blogumentary. Never looked at this book. There's so much nonsense still predicated on the "knowledge" Taubes bestowed on people. I also came across recently that diabetes, T2, involves an impairment of both glucose uptake by adipocytes and de novo lipogenesis in adipose tissue. While adipose DNL may not be quantitatively significant in developing obesity, it may well be important in signaling.

ItsTheWooo said…
If both thighs are subjected to this growth, she WAS rotating sites. AS a nurse I promise you the majority of diabetics rotate between two areas - left/right arms, left/right abdomen, or left/right thigh. No diabetic does arms, abdomen, and thighs. This woman's injection patterns are unremarkable.

I do agree the pictures are not particularly good evidence , but this is mainly because the side effect is purely a result of non-human insulin being used in human beings, and no longer is observed with the invention of human insulin.
June 19, 2012 at 1:37 PM

CarbSane said…
Yes, I'd seen that before & blogged on it somewhere, but that's a good catch Woodey. Because he now posted the "answer" -- I note they also say it's due to increased glycemic flux -- e.g. more glucose transported in and presumably then converted to fat by DNL. The local concentrations of insulin are ridiculously high compared to circulating endogenous levels.
June 20, 2012 at 8:49 AM

Woodey said…
When he first posted that I viewed it as poor man's fear tactics, one of those pics aimed at scaring people who didn't possess the knowledge to debunk it. Yet another reason for why I am glad you speak up.
June 20, 2012 at 9:26 AM

Jason Sandeman said…
As a nurse - you understand that what you are calling "rotation" is anything but. Rotation means you let the injection site rest and heal. There are times after injection I can feel a lump. After a few days, it dissapears.

Plus, human insulin is not available for injection. There is a choice - either animal, or synthetic. Most older diabetics I know gained weight when they went to synthetic. Tells you something about that.
July 3, 2012 at 11:18 PM

Drew said…
I mean this very respectfully, because I'm truly trying to figure this out and I like your blog-- definitely interesting, thoughtful writing. I'm just trying to figure out what the point of it is? You imply that a lot of low carbers are scamming people-- are you saying that LC doesn't work or that Atkins is ineffective? That quality of food, macronutrients don't matter, vitamins, minerals, etc... don't matter? Simple as calories in, calories out?

I've digressed quite a bit and suppose I just need an 'obesity theory' pen pal, but I really am trying to go through all of your posts and figure out if there's evidence that low carb doesn't really work or it's setting me up for a massive regain. I guess I would rather be overweight at the weight I am now than yo-yo back to this and more.
July 13, 2012 at 7:44 AM