- April 27, 2013
Something I've been reading a lot lately would be along the lines of "first phase insulin response is deficient/missing from the early stages of diabetes".   This is true, but even in the peer review literature that term seems to be misused to equate with the acute spike in insulin levels to a high oral glucose load.  However the first phase insulin response, hereinafter FPIR, is a non-physiologic phenomenon sometimes used to assess pancreatic function.

First-phase insulin secretion: does it exist in real life?  Considerations on shape and function  (decluttered  of references, please see origina, some parts bullet-pointed, etc. for clarityl)

IN THE PAST THREE DECADES, the relevance of insulin secretion abnormalities in the pathogenesis of type 2 diabetes mellitus have been extensively debated, and a consensus has been reached that, to fulﬁll its pivotal role in regulating glucose metabolism, insulin secretion must not only be quantitatively appropriate, but also possess qualitative, dynamic features that optimize insulin action on target tissues. In particular, increasing emphasis has been placed on the importance of the so-called ﬁrst-phase insulin secretion to glucose homeostasis.  The aim of this review is to address the following questions:

This figure shows the difference between insulin responses to the "diagnostic" IV glucose and glucose in a meal. 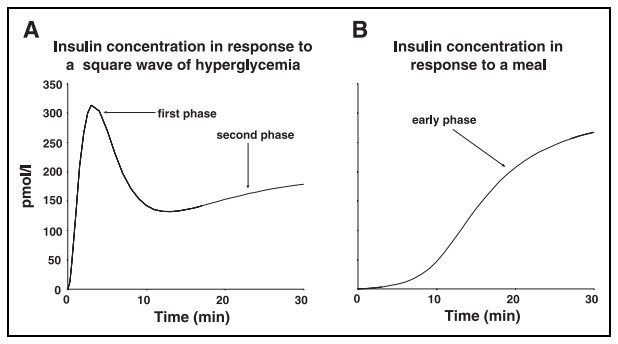 The glucose level does not rise abruptly as in the IV administration (left) when glucose is ingested.  Therefore the biphasic insulin response seen for the IV glucose is not seen in response to a meal.  The caption to this figure points out that in addition to the glucose itself, the following things are involved when glucose is ingested:  Fatty acids and other secretagogues [stimulators] in the meal, the cephalic response, and gastrointestinal hormones [e.g. incretins like GLP-1]

Now the authors of this paper do some computer modeling and such in coming around to the following:

An increasing body of evidence indicates that the early insulin response following glucose ingestion plays a critical role in the maintenance of postprandial glucose homeostasis.  The early surge in insulin concentration is capable of limiting the initial glucose excursion mainly through the prompt inhibition of endogenous glucose production, with the insulin mediated curtailment of glucagon secretion being particularly relevant.  This conﬁrms, under physiological conditions, the ﬁndings of the studies that assessed the metabolic relevance of the ﬁrst-phase insulin response to intravenous glucose. In the following discussion, we will provide a brief synopsis of the studies that assessed the beneﬁts associated with the early phase of insulin release as well as the problems that are associated with its impairment.

Basically it comes down an acute response of some sort, whether it's a spike or more of a ramping up ... and being able to sustain the secretion necessary to maintain glucose homeostasis (and more). 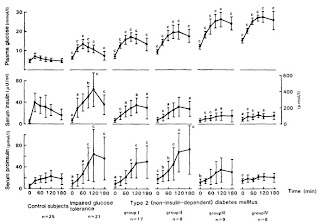 So let's put this together with the changes in insulin secretion and glucose levels in the progression of glucose intolerance through diabetes.  (From this blog post on this study).  You can click to enlarge but top to bottom are series of glucose, insulin and proinsulin responses to a standard OGTT, from left to right in normal, IGT, and four "stages" of T2 based on progressive fasting glucose levels.  It is clear that even before diabetes, the acute insulin response is lacking which causes glucose levels to go higher prompting an increased but delayed insulin response.  It is also clear that the beta cells are already having a problem efficiently meeting this need for insulin and secreting incomplete product that can't do the job.

Mostly I'm posting this because it is not always made clear that the FPIR is not physiologically relevant per se, but there seems to be a clear relationship between it's presence or absence in an intravenous glucose test and proper insulin secretion in response to a glucose load.  Given the very short time frames involved, and how there would be fewer complicating factors in assessing glucose and insulin levels, I'm surprised we don't hear more about this as a diagnostic measure.  I admittedly haven't looked much into this aspect of things.

Nigel Kinbrum said…
As an ex-electronic engineer who's worked on negative feedback (NFB) control systems, this is of great interest to me.

A mixed meal has glucose entering the blood relatively smoothly as in graph B. Ditto for low-GI carbs. High-GI carbs approach the step-function glucose level in graph A (depending on how high the GI is). Low osmolarity starches e.g. maltodextrin can have a GI higher than glucose.

This is where a lack of 1st phase insulin can cause problems, as it causes a "lag" in the feedback. A lag in the feedback of an NFB loop causes the output to overshoot, the output being insulin in this case. An overshoot in insulin secretion causes a subsequent undershoot in blood glucose level -> munchies! See http://www.jci.org/articles/view/57873
April 27, 2013 at 6:32 PM

Reijo Laatikainen said…
Thanks for clarifing the concept of FPIR. This was not clear to me.

"Incretins, which are hormones released by the gastrointestinal tract in response to nutrients, augment glucose-mediated insulin secretion.[3] Their existence was suspected over a hundred years ago,[4] but was not confirmed until researchers found that the oral administration of glucose resulted in a greater increase in insulin and a more sustained response when compared with glucose administered intravenously.[5, 6] An estimated 50–70% of insulin secretion after glucose ingestion is attributable to this observation, which is now known as the ‘incretin effect’.[7]" http://goo.gl/zeHLy (Zarrinpar A, Loomba R. Aliment Pharmacol Ther. 2012 Nov;36(10):909-21. Review.)

While oral glucose load (or a meal) may escape FPIR it causes higher and prolonged insulin levels, doesn't it?
April 28, 2013 at 3:10 AM

Nigel Kinbrum said…
The small graphs above stop at 180 minutes. I had a 300 minute OGTT in Jan 2003, when I had Impaired Glucose Tolerance. The results are in mmol/L, taken from t=0 minutes &

carbsane said…
How are you doing now? Have you had an OGTT since? A possible explanation for RH is that your pancreas makes insulin but not the acute secretion so it ends up making too much late in the game when glucose is clearing out and no more is coming in. In that case, low GI (slow digesting) would help prevent the hypo.
April 28, 2013 at 7:30 AM

carbsane said…
The article seemed pretty "adamant" that even high GI carb ingestion is not the same as the IV bolus. I think the IV test would identify beta cell dysfunction sooner in the progression than the OGTT. What say you?
April 28, 2013 at 7:32 AM

Nigel Kinbrum said…
Yes. Whacking glucose straight into the blood is a perfect step function. Dietary high-GI carbs will always ramp up to a maximum, the slope of the ramp depending on the GI. Anyway, I have a party to attend. So, ciao for now!
April 28, 2013 at 8:10 AM

carbsane said…
Hi Reijo, Yes, the oral load should produce more insulin. I think this incretin effect is what is at play in GBP surgery diabetes remissions -- faster nutrient stimulation of incretins -- perhaps coupled with the dramatic reduction of caloric intake.
April 29, 2013 at 5:58 AM

Jane Karlsson said…
Nigel, the 2-hour OGTT is for diagnosing diabetes, which you clearly don't have. However, you did have reactive hypoglycemia in your earlier 5-hour test, and it could be that you still have it. In reactive hypoglycemia blood glucose doesn't fall below baseline before about 3 hours, as I understand it, and that's what happened in your earlier test.
April 29, 2013 at 6:04 AM

Nigel Kinbrum said…
No. According to http://ajcn.nutrition.org/content/79/5/820.full.pdf , 2-hour BG value has a negative correlation with 25(OH)D concentration (Fig 1C).

25(OH)D concentration has a positive correlation with insulin sensitivity (Fig 2A).

Jane Karlsson said…
I'm not talking about insulin sensitivity, I'm talking about your beta cells. You clearly had reactive hypoglycemia 10 years ago, which would have been caused by delayed insulin secretion and overshoot. If you still have it, it would explain your dislike of high-GI foods.
April 29, 2013 at 10:36 AM

t s said…
I suspect, in the begining, low GI foodstuff were all that was edible. So, the glitchy pancreas sustained a life span with low GI foodstuff until reproduction was possible for the specie.....While searching for the next bite of food, a dollop of honey may have sustained them from hypoglycemia.

Nigel Kinbrum said…
I don't know if I still get reactive hypoglycaemia (RH), as I don't eat large amounts of high-GI carbs. I thought you were implying that my OGTT result of 3.7mmol/L was due to RH. In my case, RH took over 3 hours to appear.


As I am still what could be considered "fairly sedentary", I rarely eat large amounts of any sort of carbs, as my body doesn't need them. I do allow myself some treats! I just don't make treats my staple diet.
April 29, 2013 at 12:44 PM

Anxiety Hunger Palpitations Dizziness Irritability Tingling Tremors Blurred vision
Sweating Difficulty-in-thinking Faintness
then there may be a diagnosis of being hypo.

Nigel reports a level of 39 in his 1st OGTT and 37 in his 2nd. The endo told him
"to go away". I guess the endo did not clearly envisage that Nigel was experiencing a hypo -
otherwise he might have advised 5 gm of sub-lingual dextrose.
April 29, 2013 at 12:50 PM

Nigel Kinbrum said…
It was an extended OGTT (EOGTT). I wasn't allowed to eat or drink anything for 5 hours.

It was a couple of weeks later when I saw my endo' to discuss the results of the EOGTT. He said that I was no longer IR and that my blood test results were now all pretty much in the RR, so I wouldn't need to see him again unless I had a relapse (I didn't!).
April 30, 2013 at 7:35 AM

Jane Karlsson said…
Well it's standard for blood glucose not to fall below baseline before 3 hours in RH, and your endocrinologist should know that.

The point is, all the evidence I have seen is consistent with the idea that blood glucose will only fall below baseline if you have beta cell malfunction, and that that this is caused primarily by iron overload and manganese deficiency. Eating a low carb diet is not the best way to correct that, although obviously eliminating refined carbs will help.
April 30, 2013 at 10:04 AM

Blogger said…
Using EasyHits4U you can earn free advertising credits by visiting other ads from a user base of over 1.2 million accounts. Earn credits fast with a view per view model.
September 11, 2017 at 9:33 PM